Jeep YJ gas tank mod - It's a know fact that many YJ's came out with 15 gallon tanks. There was an option for an upgrade to a 20 gallon for an upcharge.

Here is a sneaky trick that Chrysler pulled off. Customer orders a new Jeep. Gets many upgrades such as air conditioning, nice sound system and even upgraded interior. Then they get to the 20 gallon upgrade option on the order list. Oooo .. gotta have that so I can enjoy driving longer between fill ups.

Jeep YJ gas tank mod - I like the end result!

Doing the 15 to 20 gallon YJ tank mod is fairly straight forward. But not always easy. But it is free! Just a little bit of time involved. There is a video at the bottom demonstrating the mod.

Here's what to do:

Now the real fun begins. Look at the two necks protruding out of the tank. Notice how the smaller one is thicker walled than the larger diameter one? That's because there is another tube inside the vent neck (smaller diameter neck). It needs to come out.

Tap or wedge a small screwdriver between the two layers. 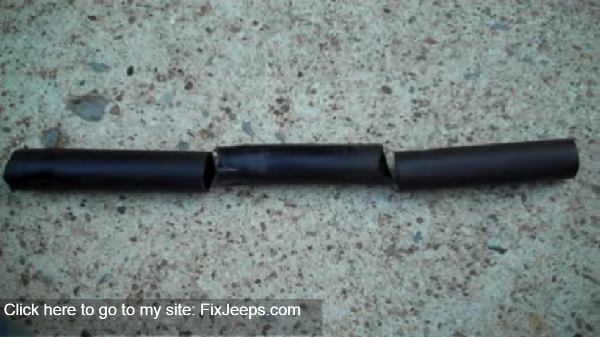 Once you have split the tube from the neck. Cram the point of needle nosed pliers between the layers. Grip tight and pull out that plastic tube. You might want to wear gloves to protect your hands in case the pliers slip off the vent tube. Once the vent tube is out far enough, get some pliers that really grip to finish pulling the tube out.

As you can see to the right. I had to cut this one in 3 sections as I pulled it out.

Now that you have performed the Jeep YJ gas tank mod. Go filler up!

I have to point out one important thing that may trigger some OCD issues for some people. The fuel hand will show full for a long time. This is because the fuel level is higher than the 15 gallon sending unit can accommodate. So, until the actual fuel level is less than 15 gallons in the tank, the sending unit and therefore the fuel gauge will not move. Once it starts getting below 15 gallons the fuel hand starts dropping as it should.

If you want to spend the money, you can buy a 20 gallon sending unit, click here for current Amazon pricing. Drop the tank and install it. I run the 15 gallon sending unit and it reads fine. Even when it gets real close to empty mine is still accurate.

The only down side to this gas tank mod it that it now costs more to fill up. But I can go longer between those fill ups so it doesn't actually cost anymore over all.

I am very happy I did this tank mod to my YJ.

See the YouTube video below for a great tutorial.

Realizing it may be possible that you simply need some new parts for the fuel tank in your YJ. After all, they are old rigs that may have been through some neglect and abuse. So, Here I'll give you some links to get the parts you may need to fix up the fuel tank for your rig.

First off I'll add in a link to a new fuel tank. This is a 20 gallon tank that includes new straps. It is very rare that those straps aren't about rusted in two.

Here is the 20 gallon fuel sending unit that includes a new fuel pump. This unit is for Fuel Injected Jeeps only, if you have a carburetor, it will not work. I'll add in the carburetor version below. On some Jeep YJs that may have lived their life  up north in the rust belt. I have seen the top plate of this sending unit be completely rusted through causing fuel vapor leaks. NOT GOOD! So, if you have to drop your tank for any reason, check the top plate for rust to make sure it is structurally intact. Also, keep this in mind. Yes it is possible to find a less expensive system. But you get what you pay for! Do you wanna install a new pump and drive .. or .. swap in a new pump every few months.

This fuel sending unit is for the carburetor Jeep Wrangler YJs only.

As I mentioned above, for northern bust belt Jeep Wrangler rigs, rust is common. This skid plate holds everything it catches!! Without dropping the tank there isnt anyway to wash out the salt and junk that builds up. So, does your skid looks like Swiss cheese? Here is a factory replacement for ya.